As food insecurity kicks us in the faceOpinion – Guardian

As food insecurity kicks us in the faceOpinion – Guardian 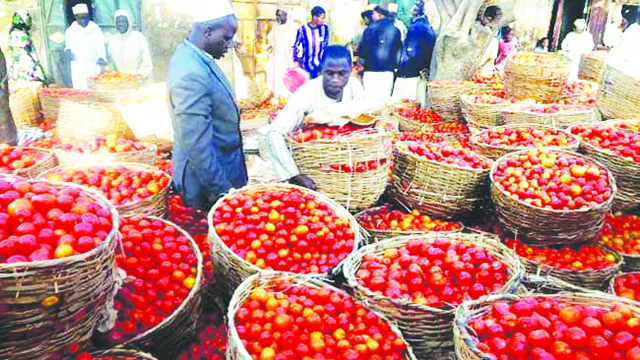 There comes a time when the authorities need to heed a certain call when we need to come together as one. Borrowing some brilliance from the masterminds of the USA for Africa, 1985 concert for Ethiopia, we need to tell our leaders that there may be more people dying soon, and so it is a time to lend a hand to life, the greatest gift of all…This is a time to tell our leaders at all levels that we can’t go on pretending day-by-day that someone somewhere will soon make a change that they promised us… We need to stress this as the 1985 legends told the world than that, we’re part of God’s big family, and the truth we all know is: love is all we need from our duty bearers now, not oratory, nor sophistry as – food insecurity, the deadliest of all insecurities, is staring us fiercely in the face.

The commander-in-chief of the armed forces and his security and service chiefs have been promising and promising that they will sooner than later end the rampaging insecurity posed by the combined effects of insurgency, banditry, abduction in the country. As we stand on the promises upon promises since 2015, as we continue to smart from the debilitating consequences of even extra-budgetary allocations to secure the country, there is a need to alert the authorities about the implications of the vilest of all insecurities, yes the strain that can make other forms of insecurity pale into insignificance. The name of that monster is food insecurity!

The governors of southern Nigeria were told to ‘buckle up on food production…’ last week when they were reminded that, ‘If tiny Israel could feed self, why not Southeast…?’

The origin of the construct: Stakeholders in agriculture and farmers in the South West, last week allayed fears of food scarcity following the alleged stoppage of food supply to the region. But the concerned stakeholders were quick to challenge state governments in the region to take full advantage of massive fertile land in Southwest for food production and stop paying lip service to the development of agriculture and its value chains.

The southwest chairman of All Farmers’ Association of Nigeria (AFAN), Mr. Olusegun Dasaolu, had then noted that the stoppage of food supply to the South was a warning of what to expect in the future. His words: “It is a warning sign. The signal therein is telling us that we need to buckle up as far as agricultural production is concerned. They blocked the supply, and within two or three days, these products are not in the market. It should not be so. We have the land and other resources enough for us to produce in the Southwest. We need to restrategise. It is a good development that has taught us to buckle up…In the South West, we have the capacity to feed ourselves and export. If you move from Lagos to Ibadan, left and right, what you see are thick forests…we talk much about agriculture. We need to actually walk the talk by focusing more on agriculture because people that can’t feed themselves are slaves. So, much as we have all other resources, there is a need for our government and the private sector to strongly collaborate and see how we can harness the resources surrounding us so that there can be abundant food production in the Southwest. We have the capacity to produce and even export…”

In the same symposium interviews that led to the significant story in The Guardian (Nigeria), Dr. Olabode Badiru, a lecturer at the Faculty of Agriculture, University of Ibadan (UI), Ibadan, said regional states could feed their citizens if they practised smart agriculture, using the right technologies. He said: “We have some of the best researchers in the continent domiciled in the region. That is, we have the know-how. However, this potential won’t transform into food security overnight.” The university don lamented as we often do that states lacked coherent policies on agriculture but just key into national policy half-heartedly.

In the same vein in the Southeast, a chieftain of Ohanaeze Ndigbo, Chief Chekwas Okorie, described the action of the northern farmers who blocked food items to the South as most thoughtless and self-inflicted damage any set of Nigerians could unleash on unsuspecting and hapless traders and farmers alike.

According to him, although the protesters who erected the blockade have called off their action, the economic setback, business losses and social dislocations they caused might never be redressed in a long time. Okorie’s lamentation as our power elite often do here: “If Israel that occupies a far smaller and desert land space than the southeast geopolitical zone can feed itself and export their surplus, there is no reason any section of Nigeria should willfully surrender the critical issue of food production to any other section of the country.”

Which is why political authorities in Abuja and the 36 state capitals should not deconstruct the story of the boycott of food transport from the north as a political story. The development should be read by state risk analysts as intelligence on the state of the nation. It is a pointer to the fact that we are gambling with another crisis that can shake the nation if authorities dismiss the development as a mere political story by the enemies of this administration. The deep that should call to the deep in the capitals should contextualise the developing story as an update on some similar warning signals from December 2020, to January 2021.

In a business-and-economy data-rich story last month, we read that, “It now costs Nigerians twice the average amount spent on food five years ago to purchase the same today. That’s after food prices rose to the highest level in more than 12 years, according to inflation data published by the National Bureau of Statistics (NBS). According to the story, the prices of food have soared to 20.57 percent in a monthly inflation survey, which is the highest record in the last 12 years.

The last time Nigeria recorded a similar significant rise in food inflation was between 2008 and 2009, according to the National Bureau of Statistics (NBS). The Consumer Price Index (CPI) report released by NBS in the same vein showed that the headline inflation rose to 16.47 percent in January 2021, higher than 15.75 percent recorded in December 2020. However, the high prices of meat, bread and other consumables pushed the food inflation to 20.57 percent from 19.56 percent recorded in December 2020.

Rise in the food index was caused by increases in prices of bread and cereals, potatoes, yam and other tubers, meat, fruits, vegetables, fish and oils and fats, the report stated but as Nigeria had been in recession since the third quarter of last year but as analysts had projected, the country exited recession the order day in a way that wasn’t so promising. Analysis had shown then that the food sub-index increased by 1.83 per cent in January as it declined by 0.22 per cent from 2.05 per cent in December 2020. The economic outlook then also showed that the urban inflation rate increased by 17.03 percent in January from 16.33 percent in December, while the rural inflation rate rose by 15.92 percent from 15.20 per cent in December last year. A comment by the Bureau in the report said: “The highest increases were recorded in prices of passenger transport by air, medical services, hospital services, passenger transport by road, pharmaceutical products, paramedical services, repair of furniture, vehicle spare parts, motor cars, miscellaneous services relating to the dwelling, maintenance and repair of personal transport equipment.”

At the same time, specifically in the middle of December last year, the Central Bank of Nigeria (CBN) warned that its economic and financial policies would amount to nothing if the issues around food prices volatility could not be addressed as a nation. The governor of the apex bank, Mr. Godwin Emefiele, made the remark in a message to the input distribution flag-off and loan recovery drive under the RIFAN-CBN Anchor Borrowers’ Programme (ABP). Emefiele’s message was instructive: “With a population of about 200 million people, importation of any major food item will continually drain the country’s external reserves, export our jobs to countries where those food items are produced and distort our commodity value chains as we will not be able to guarantee the supply of raw materials for the agro-allied companies.’’ These are vital pieces of evidence of imminent food crisis and indeed food insecurity as FAO has always warned.

As recently reported, by an international organisation, in Nigeria, where recurrent conflict is already resulting in high food assistance needs, the COVID19 pandemic and measures to prevent its spread have concomitantly driven needs even higher. Besides, macroeconomic conditions have deteriorated sharply, following the drop in international oil demand, which led to a decline in revenue; the subsequent depreciation of the naira has pushed up staple food prices. As a result of higher food prices, in combination with reduced access to income given movement restrictions, poor households are facing increased difficulty meeting their basic food needs. What is more, farmers’ ability to engage in planting for the agricultural season has been limited and this has been due to movement restrictions and contractions in household income, which reduced households’ ability to purchase agricultural inputs; as such, a below-average main season harvest is expected. Overall, six to seven million people will require humanitarian food assistance in Nigeria during the lean season, and while food security may improve with some harvest, needs are expected to remain higher than normal. The Government of Nigeria (GoN) and humanitarian actors should plan for continued high food assistance needs through at least the beginning of 2021…

I think this is a fact file on food insecurity that risk analysts and indeed intelligence chiefs in all our political capitals should take more seriously than the wailings and meretricious suggestions by the Gumis and other sundry conflict entrepreneurs in the country. Certainly, food insecurity not properly managed at this time could be a tinderbox that may be more ticklish to manage than the challenges of insurgency, banditry and abduction.