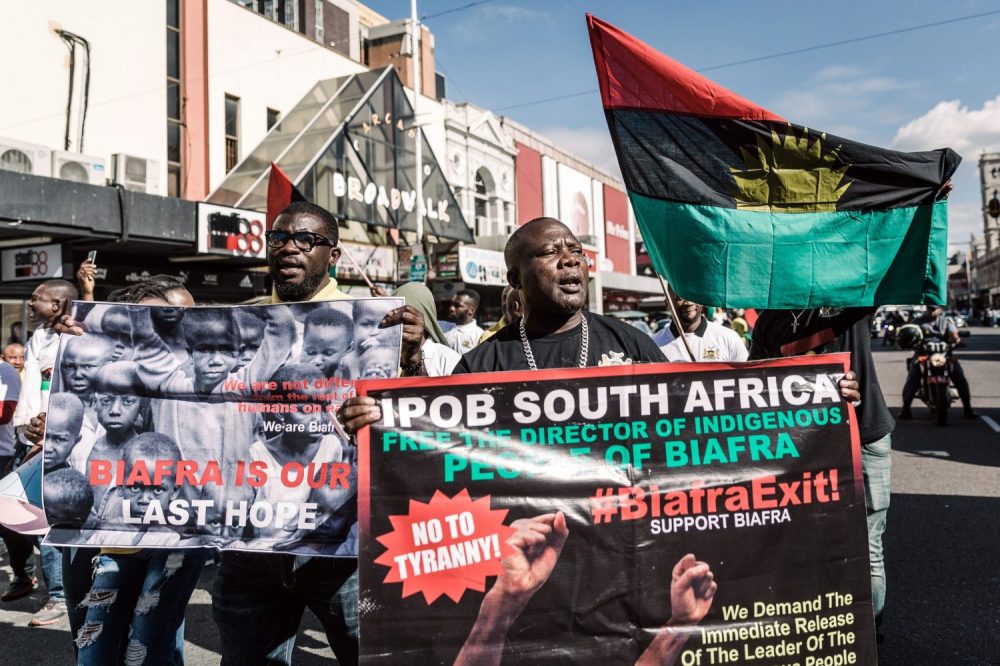 JOHANNESBURG—On Jan. 15, 1970, Nigeria’s civil war with the breakaway nation of Biafra officially came to an end. The war came after coups and countercoups around the central government, followed by a pogrom in which an estimated 30,000 Igbo people were massacred in the north, causing over a million people to flee into the east. The failed Aburi Accord—a conference convened to address rising tensions between the central government and the Eastern Region in 1967—was the final straw.

Nigeria’s reintegration of the breakaway state was surprisingly successful, despite the horrors of the war. About 2-3 million people—mostly women and children in Biafra itself—died in nearly three years of conflict. But 50 years later, Biafran independence is once again a powerful cause.

On May 30, pro-Biafra groups and their supporters celebrated the anniversary of the declaration of the Biafran Republic on May 30, 1967, by Col. Odumegwu Ojukwu—a 33-year-old Oxford University-educated historian-turned-military officer. With public events canceled, private memories shared with others online became key this year. Prayers in remembrance of the war’s victims and survivors dominated, as well as posts and images on social media, sparking more support for the Indigenous People of Biafra (IPOB), a group that has long been agitating for an independent state of Biafra.

For more than five years now, IPOB and other pro-Biafra groups have been organizing peaceful protests across the country and demanding self-determination. Led by Nnamdi Kanu, a British Nigerian activist, IPOB blames the central government for leaving the region marginalized and is seeking a peaceful referendum to break away from Nigeria and create a separate state. That doesn’t sit well with the fragile central government, which has frequently used force to try to crush the movement.

In October 2015, political tensions ratcheted up when Kanu was arrested by Nigeria’s security forces on treason and secession charges on his return to the country from the United Kingdom, where he is based. Kanu runs Radio Biafra—an online radio station that broadcasts from London, where he agitates for a referendum and communicates with his followers.

Kanu’s arrest sparked nationwide protests among his followers. Each day, thousands of pro-Biafra agitators and supporters, hoisting flags and chanting Biafra songs, moved across the country, demanding his unconditional release. The protests often turned bloody with brutality and extrajudicial killings by security forces. In 2016, Amnesty International accused Nigeria’s security forces of embarking on a “chilling campaign of extrajudicial executions and violence resulting in the deaths of at least 150 peaceful pro-Biafra protesters in the south east of the country.” Abroad, Kanu’s supporters staged protests at Nigerian embassies and high commissions in the United States, United Kingdom, and Europe.

After spending more than 18 months in jail without trial, Kanu was released in April 2017 with stringent bail conditions that restricted his movements, but the agitation grew even louder with more peaceful protests and rallies.

The federal government run by President Muhammadu Buhari, a Muslim from the Fulani north, has strongly rejected any call for a referendum and stated that his administration would not bow down to demands for separatism, saying the country’s unity is “not negotiable.”

In August 2017, the trajectory of the pro-Biafra movements and agitations changed again. The government launched Operation Python Dance to quell the agitation in the region, a military operation that led to the deaths of several pro-Biafra activists. Kanu’s home in Umuahia, in the country’s southeast, was invaded and raided by security forces, which IPOB said was a “calculated attempt to assassinate him.” Kanu was whisked away by his supporters during the invasion and was hidden until he reappeared in Israel in October 2018 before returning to the U.K.

IPOB says the proscription and clampdown by security forces have emboldened and hardened its resolve and that it will keep agitating until an independent state is achieved.

The pain of Biafrans is understandable. The government has yet to hold any serious conversation to address growing grievances and some of the fundamental issues that led to the war in the first place. Many in the southeast say they have never received justice for the more than 2 million people killed during the war. Analysts say conversation or dialogue about the war could be a way of healing old wounds and forging reconciliation, building trust and national alliances.

Nigeria is still deeply divided along ethnic and religious lines, and this has played into many national and regional engagements. Marginalization, unequal political appointments, and ethnic and religious tensions are still brewing division. Since Buhari came into power in 2015, the south has criticized the president’s major political and military appointments, which have often favored individuals from the north, further deepening the divide.

“There was sadness in the heart of every single Igbo family. Nobody in the Eastern Region had not lost somebody,” Christopher Ejiofor, who was a Biafran soldier and military advisor to Ojukwu during the war, told Foreign Policy. “The blood of the innocent children who died due to starvation during the war is still seeking vengeance.”

Ejiofor, who is the author of Biafra’s Struggle for Survival—a personal account of the war—said: “The Nigerian-Biafra civil war should have never happened in my estimation.”

Unlike the memorials and national day of remembrance set up in Rwanda after the 1994 genocide that led to the deaths of some 800,000 people, Nigeria doesn’t officially commemorate the war. There are private efforts—such as the Centre for Memories, located in the former Biafra capital city of Enugu, which holds exhibitions each year to commemorate the war—and there have been past gestures.

In January, during the 50th anniversary of the end of the war, Nigeria’s vice president, Yemi Osinbajo, became the first high-ranking government official to say that a national conversation about the war was necessary.

“Without mincing words, the civil war was a defining national tragedy and a robust national conversation is necessary to aid the process of healing and reconciliation,” Osinbajo tweeted after visiting the National War Museum, which showcases some of the relics from the war. “The last 50 years belonged to us, but the next 50 belong to our children and we must unshackle them from ghosts of ancient grudges & grievances.

“By their conduct, our children show us that it is possible to forge friendships, let us give them a chance to do better than ourselves.”

Established in 1985, the museum was aimed at putting aside the ugly past of the war and moving forward toward the process of national reconciliation and healing. But that hasn’t happened—partially because the museum’s efforts haven’t been met with serious legal or governmental commitments.

The Biafra agitation, now led by mostly young people, is just getting started. The present government, like most of those before it, has no interest in reconciliatory moves such as holding a roundtable dialogue with the agitators or in leading a national conversation to address the grievances that have left the country still divided five decades later. Agitators believe a new breakaway is imminent—but the government’s answer may yet again be force.