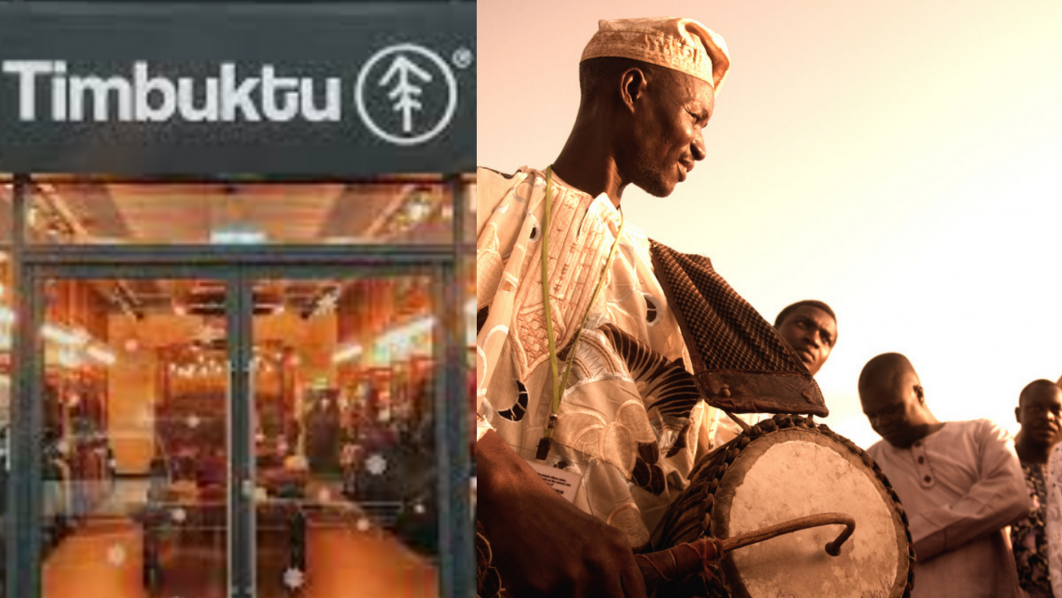 A British fashion brand has come under criticism on social media for trademarking “Yoruba,” the name of an ethnic group in West Africa.

Timbuktu, an outdoor clothing brand based in northern England, filed to trademark the word “Yoruba” in 2015, records from the UK’s Intellectual Property Office show.

But the registration sparked anger on Sunday when Gbemisola Isimi, the founder of CultureTree, an African cultural center in London, wrote that she had attempted to trademark “Yoruba Stars” and claimed she faced a opposition from Timbuktu due to its similarity to the phrase the company had registered.

In the United Kingdom, a proposed trademark can be challenged if it conflicts or bears similarity to one that was previously approved.

“I thought it was really strange that a company would be allowed to trademark the word ‘Yoruba’, a tribe and language of millions of people,” Isimi wrote in a which she shared on Instagram and Twitter, adding that Timbuktu had opposed her attempts to register her own phrase “Yoruba Stars”.

The Yoruba people are an ethnic group that inhabits western Africa, mainly the countries of Nigeria, Benin, and Togo. The Yoruba constitute around 35 million people in Africa. The vast majority of the Yoruba population is from Nigeria, where the Yoruba make up 15.5% of the country’s population, making them one of the largest ethnic groups in Africa.

“I went ahead and registered my trademark of ‘Yoruba Stars’ as I was sure there wouldn’t be an issue. A few months later I received an email from the IPO that @timbuktuglobal had opposed me registering the trademark and were in effect opposing anyone from using or registering any brands with the word ‘YORUBA’ under the classes they have registered it on. Bearing in mind, this company does not offer any services, products or have anything to do with Yoruba at all.”
⁣
Isimi said she sought legal counsel after Timbuktu made a proposition to sell their trademark of the word ‘Yoruba’ to her.

“I feel this is the height of cultural appropriation,” Isimi wrote. “I’ve informed @timbuktuglobal that I intend to make this case public. I told them I do not think Africans or the global media for that matter would take kindly to a company with roots in the North of England attempting to claim sole ownership of a birth right belonging to the people of another continent.”

Soon after, Timbuktu Limited deactivated its Twitter handle and disabled comments on its Instagram page. They also sent an email stating that they would be handing the trademark over to Culture Tree for free. 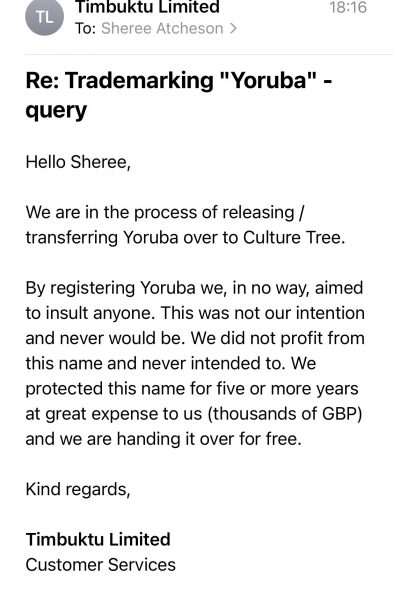 Meanwhile, the UK’s Intellectual Property Office maintained that the validity of a trademark can be challenged by the public, in it’s response to Isimi’s tweets:

Once a trade mark is registered it is possible for a member of the public to challenge the validity of the mark if it is believed that there are grounds to remove the mark from the trade mark register. More information can be found here: https://t.co/oCbcIXKBD4 (3)