The Central Bank of Nigeria (CBN) is exercising its power to reflate the economy through funding support for key sectors especially the agricultural sector. The Anchor Borrowers’ Scheme, Agri-Business, Small and Medium Enterprises Investment Scheme (AGSMEIS), Commercial Agricultural Credit Scheme (CACS), the Agricultural Credit Guarantee Scheme (ACGSF) and other initiatives were introduced by the apex bank to support local farmers in making food available to the population, encourage the consumption and patronage of Nigeria farm produce and supporting domestic economy, writes COLLINS NWEZE.

Before now, farmers were the least that banks would consider for loans. Such loans, if approved, were deemed lost from the outset, especially when advanced to smallholder farmers.

Today, the story has changed. Both the smallholder farmers and commercial farmers can access long-term loans from banks at a single interest rate.

Also, lenders, which previously saw agricultural credits as high risk, are now seeing the potential of how much a well-priced facility can add to their balance sheets and profitability.

The new thinking in agriculture credit and access to loans by farmers was made possible by several intervention programs instituted by the Central Bank of Nigeria (CBN) to lift the agricultural sector and support food sufficiency.

The CBN Governor, Godwin Emefiele said the apex bank has disbursed funds under its various agricultural interventions towards improving food supply in Nigeria.

According to Emefiele, under the ABP, farm inputs are provided in cash and kind to smallholder farmers (SHF), thus guaranteeing input supply to agro-processors. During harvest, the farmer supplies produce to the agro-processors (anchors) who then pay the cash equivalent to the farmer. Rice, a major commodity under the ABP, is the third-most consumed staple food in Nigeria — after maize and cassava — and has become a food security crop due to its increased significance in the country.

Emefiele explained further that over 3.1 million farmers have been financed for the cultivation of crops across twenty-one agricultural commodities captured under the ABP since inception.

“A total of 3,107,890 farmers had been financed for the cultivation of 3,801,397 hectares across 21 commodities through 23 Participating Financial Institutions in the 36 States of the Federation and FCT, from the inception of the programme till date,” Emefiele said.

He added that under the 2020 wet season CBN-Rice Farmers Association of Nigeria (RIFAN)   partnership, the bank also financed 221,450 farmers for the cultivation of 221,450 hectares in 32 States.

Emefiele expressed hope that the incentive would improve the standard of living of farmers in Nigeria, motivate prompt loan repayment and ultimately enhance the sustainability of the programme. “Loan repayment is the hallmark of every credit cycle and the sustainability of the programme is hinged on farmers’ ability and willingness to repay their loans, and we are constantly engaging with them to enhance their trust in the system,” he said.

Taofik Ibrahim, a rice farmer, said the ABP has been of great support to his farm, as the yield per hectare has improved with one hectare yielding an average yield of 90 bags of rice paddy on optimally performing land. The minimum was about 75 bags.

He explained that with ABP, farmers are provided with six bags of fertiliser per hectare, a water pumping machine, and herbicide, then cash support.

According to him, more people in Kebbi, including civil servants, have gone into farming because of the opportunity provided by the CBN through the ABP.

How intervention funds are disbursed

CBN data showed the apex bank disbursed N107.60 billion to 548,109 farmers cultivating 703,619 hectares of land between the fourth quarter of 2020 and the first quarter of 2021 to boost dry season output in support of agricultural value chain development.

Total disbursements as of end-February 2021 amounted to N1.487 trillion under the various agricultural programmes, of which N686.59 billion was disbursed under the Commercial Agricultural Credit Scheme (CACS) and N601.75 billion under the Anchor Borrowers Programmes (ABP) to 3,038,649 farmers to support food supply and dampen inflationary pressures.

The CBN also authorised commercial banks to give up to N2 billion maximum loan to youths interested in going into agriculture.

The loan, which comes under the Accelerated Agriculture Development Scheme (AADS) at a five per cent interest rate per annum was created by the regulator in collaboration with state governments to engage 370,000 youths in agricultural production.

According to the loan guidelines signed by CBN Director Development Finance Department, Yusuf Yila Philip, the maximum loan accessible under the scheme is N2 billion per obligor.

Philip said the country’s population pyramid is bulging around the youth segment, with an estimated 75 per cent of the population which is below 35, saying a large segment of this population would have eked out a living if adequate opportunities were harnessed in agriculture given its potential of employing over 70 per cent of the workforce.

To the success of the AGSMEIS scheme, the CBN has pegged non-interest banks’ funding of agricultural programmes at a maximum N2 billion equity.

The investment is set at 40 per cent of the investee company’s equity subject to a maximum of N2 billion and tenor of up to 10 years. It has an initial lock-up period of three years.

The new rule is contained in the guidelines for the Agri-Business, Small and Medium Enterprises Investment Scheme (AGSMEIS) for Non-Interest Financial Institutions (NIFIs) released by the apex bank.

The guidelines, signed by CBN Director, Financial Policy and Regulations Department, Kelvin Amigo, described AGSMEIS as an initiative of the Bankers’ Committee supporting the government’s policy measures and efforts for the promotion of agricultural businesses.

“The AGSMEIS Non-Interest Fund will be domiciled in a dedicated account with the CBN while each Non-Interest Deposit Bank, full-fledged or window, shall set aside five per cent of its profit after tax (PAT) annually as a contribution to the fund”.

“Also, each Non-Interest Deposit Bank shall transfer its contribution to the CBN not later than 10 working days after the Annual General Meeting (AGM) of the participating bank,” the guideline said.

The eligible activities under the scheme include businesses across the agricultural value chain, covering production, inputs supply, storage, processing, logistics and marketing. Also captured in the scheme are (MSMEs) in the real sector including manufacturing, mining and petrochemicals; MSMEs in the service sector including information and communication technology (ICT) and the creative industry and other activities as the Central Bank of Nigeria (CBN) may determine from time to time.

A Special Purpose Vehicle (SPV) shall be established to manage and monitor investments/projects under the scheme. The guidelines also said the application of the fund shall be categorised into three broad components: debt ( 50 per cent), equity (45 per cent) and developmental components (five per cent).

The debt component shall constitute 50 per cent of the fund which shall be disbursed to eligible businesses through Non-Interest Deposit Money Banks.

Emefiele has called on the 36 states of Nigeria to make their states more viable by investing more in agriculture, particularly crops in which they have a comparative advantage.

He dropped the challenge in Port-Harcourt, at the launch of the Rivers Cassava Processing Company Limited, which is designed to support improved production and processing of cassava into high-quality flour in Rivers State.

He disclosed that the CBN would no longer support the continued importation of items that can be produced in Nigeria, even as he pledged that the bank will collaborate with Rivers and other States in supporting the development of a viable agricultural and manufacturing sector across the country in line with the CBN mandate of promoting economic growth for the country.

According to him, principal agencies of government at the federal and state level should continue to work hand in hand towards diversifying the Nigerian economy and creating an enabling environment for further investment by firms such as the Rivers Cassava Processing Company. 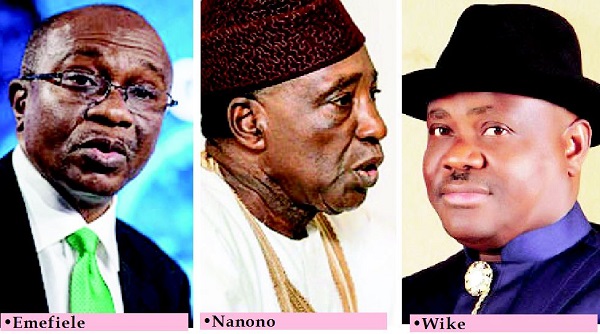 Emefiele identified land development as a major constraint to the increase in agricultural activities in the Southern parts of the country due to its topography, noting that the CBN had partnered with several States Governments in the region under the Accelerated Agricultural Development Scheme (AADS).

Continuing, he said about N7.436 billion had been accessed by four States in the South-South region to open up more land for cultivation, create access roads to agricultural lands, and provide infrastructure among other support services in the region. “These measures are helping to induce greater activity in the agricultural sector and are enabling the movement of goods from farm to factories, and to the markets,” he added.

While commending the Rivers State Government, working with Shell Petroleum Development Corporation, the Dutch Embassy Investment Nigeria Limited and their technical partners, in setting up the integrated facility, Emefiel said investments such as the cassava plant could help in driving economic growth, reducing unemployment and inducing other wealth-creating activities in the state.

Rivers State Governor Nyesom Wike invited the farmers and other interested individuals to key into the development programmes of the state, particularly in agriculture as the state is ready to divest its 80 per cent shareholdings to ensure proper management of the facility.

In Katsina, Emefiele had urged youths to embrace agriculture, declaring the bank’s readiness to support youths that are willing to engage in agriculture. This is even as the Governor reiterated the Bank’s opposition to the importation of maize into Nigeria.

He spoke during the unveiling of the first maize pyramid and flag-off of the 2021 Maize wet season farming under the CBN-Maize Association of Nigeria (MAAN) Anchor Borrowers’ Programme.

Katsina State Governor Bello Masari  said the state had suffered a setback in agriculture as over sixty thousand hectares of farmlands were uncultivated due to insurgency, which hindered farmers from gaining access to their means of livelihood.

Kebbi State Governor Atiku Abubakar Bagudu, who represented President Muhammadu Buhari, reassured the farmers, processors and other value chain participants, of the support of the government towards ensuring that they perform optimally.

Emefiele expressed the belief that Nigerian youth could leverage their talents, along with technological tools to improve farm productivity and delivery of agricultural produce to markets.

According to him, groups of youth with contiguous land for farming are eligible to seek the Bank’s support through the CBN prime anchor arrangement.

“The CBN will not only provide access to credit for these youths but will also provide guarantees that their products will be purchased by a prime anchor at agreed prices,” the Governor assured.

Justifying the bank’s continued strategic intervention in the value chains of focal crops, he said the CBN was leading the revolution because the impact of our monetary policy measures would be limited if the monetary authority in collaboration with the fiscal authorities failed to address some of the structural constraints that limit productivity in key sectors of our economy such as agriculture.

Specifically, he said the bank’s intervention was in line with its mandate and aims at ensuring price stability as well as improved availability of staple food items.