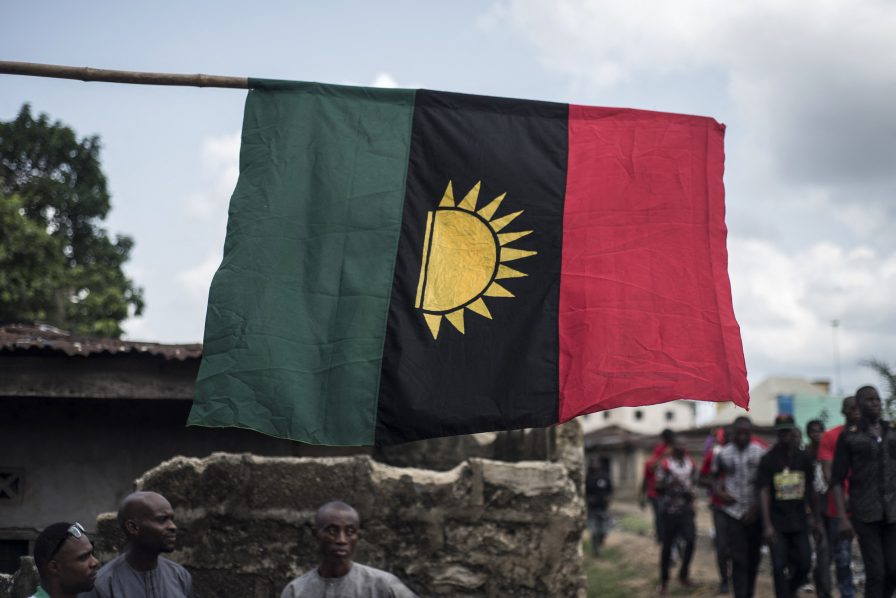 (FILES) In this file photo taken on May 28, 2017 Supporters of the Indigenous People of Biafra (IPOB) march through the Osusu district in Aba. – In a region where separatist sentiments often flare up among the indigenous Igbo, officials are pointing at the outlawed Indigenous People of Biafra or IPOB that agitates for a separate state.<br />But the situation is far from clear.<br />IPOB says it is falsely accused in a bid to divide the separatists who are already split over strategy. Some southern leaders accuse rivals of sponsoring attacks to discredit them. (Photo by STEFAN HEUNIS / AFP)

Amid the insistence of the Indigenous People of Biafra (IPOB) that its May 31, 2021, sit-at-home order would hold across the five states of the South East, the Imo Government, yesterday, asked residents to go about their activities without fear.

The Governor Hope Uzodimma administration said it had finalised arrangements with security operatives to contain any eventuality.

The Commissioner for Information, Declan Emelumba, gave the assurance at a press conference in Owerri.

He said: “Let me also use this opportunity to make it clear that Imo people should ignore the messages making the rounds in the social media, asking people to stay at home on Saturday, May 29 and Sunday, May 30.

“Imo people and residents should disregard these messages as they have no consequence whatsoever. They should go about their normal businesses without any fear of molestation.

“Let our people be assured that the government has put all necessary security measures in place to ensure the safety and freedom of movement of all Imo people on these dates and after.”

The commissioner also described as satanic and unfounded the rife speculations that security agents had been instructed to kill Imo youths extra-judicially, stating that the news was the handiwork of ‘vicious’ enemies of the state “aimed at inciting the youths to embark on a violent demonstration against the government.”

He went on: “So, I am here to urge my dear Imo youths to ignore these baseless rumours.

“The originators are those who have vowed to make Imo State ungovernable. Nothing is too sacred to them, including risking the lives of our youths in their satanic quest to have their way.

“Unfortunately for them, this government, ably led by Senator Hope Uzodimma, is more than prepared to thwart every of their devilish agenda. The government has put solid machinery in place to adequately respond to any form of security threat in the state.”

Earlier, IPOB’s Media and Publicity Secretary, Emma Powerful, in a statement, said the directive remained sacrosanct, reiterating: “There will be no human or vehicular movement throughout Biafraland on Monday, May 31.”

The statement read in part: “Every person in Biafraland is therefore advised to observe a sit-at-home order on Monday, May 31, 2021. That day is a sacred day in Biafraland in honour of the over five million Biafrans massacred by the wicked Nigerian forces during the civil war.”

“There will be a total lockdown all through Biafraland on that day, as we remember all our fallen heroes and heroines, including agitators who have paid the supreme price in the course of our struggle for independence since 1967 till date.

“All markets, filling stations, motor parks, airports, seaports, banks, schools, etc as well as social activities in Biafraland are to be shut down on that day. Everyone is to remain indoors in Biafraland from 6:00am to 6:00pm on that day. People are to stock their houses with food items before that day so they won’t have need to shop on that day.”

“We strongly advise our people against flouting this order, as anyone found outside that day may be the target of our enemies.”